This science use case not only allows us to democratize access to a member of the WRF model suite that has heretofore been the purview of a comparatively small number of researchers but also focuses on elements of sustainability and social justice linked to air quality. WRF coupled with chemistry (WRF-Chem) [1, 2] has yet to be purposefully containerized and has a relatively limited user base in part because of the additional complexity in the workflow linked to the provision of ICs/LBCs for chemical species and the need to prepare emission files. Our containers will include tools to enable these workflows that are specific to WRF-Chem and reduce bottlenecks.

The Clean Air Act has been enormously impactful in improving air quality within the U.S. [3]. However, there is some evidence that changes in atmospheric dynamics and emissions linked to global climate change may reverse recent trends towards improved air quality and declining human mortality and morbidity [4]. The theses behind these assertions are that global climate warming may lead to increased stagnation (dynamics) and/or increased anthropogenic and/or biogenic precursor emissions (chemistry).

Simulations performed on HPC have clearly demonstrated that WRF-Chem exhibits some fidelity in reproducing periods with degraded air quality in the eastern U.S. [5, 6]. It has also been shown that periods of extreme aerosol optical depth and near-surface particulate matter of diameter 2.5 microns and less (PM2.5) are greatly weakened when estimated emission changes (2005 to 2015) resulting from emission controls introduced as part of the Clean Air Act are applied and that the improvements in near-surface air quality during these extreme events are most strongly realized in areas with the worst air quality [7]. 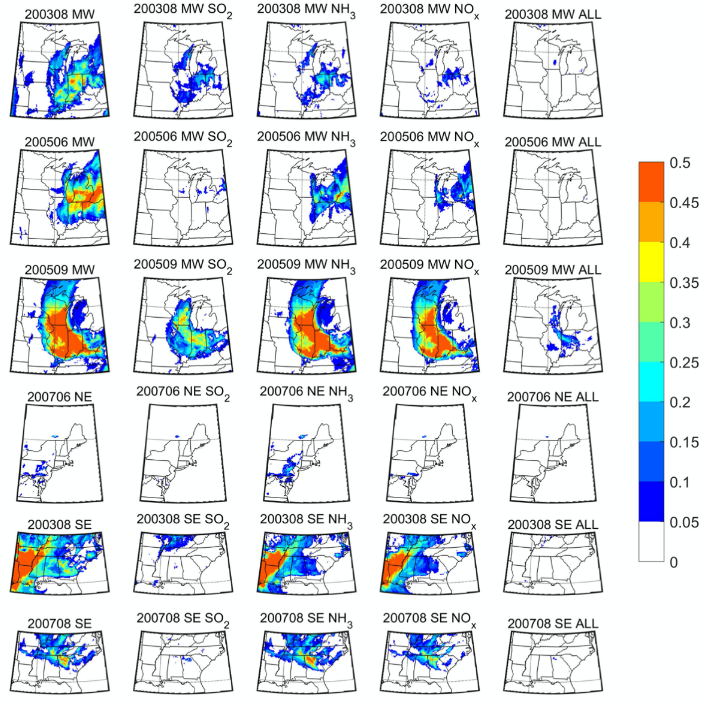 Results from previous simulations with WRF-Chem (applied with a grid spacing of 12 km) where scenarios of precursor emission reductions (2005 to 2015) were applied to historical events with extreme near-surface particle concentrations. The maps show events that impacted different parts of the eastern USA and show the probability of hourly PM2.5 concentration >35 μgm-3 over the 3 days of each extreme events for simulations with 2005 (control experiment, left column), 2015 SO2, 2015 NH3, 2015 NOx, and 2015 (ALL, right column) emissions. Areas with probability less than 0.05 are shown in white [8].

A storyline approach will be adopted, wherein historically important periods of poor quality will be simulated using WRF-Chem under current and possible future climate (PGW and changed LULC) conditions. These simulations are computationally demanding because of the increased burden associated with the chemistry component of the simulations (our experience is that WRF-Chem increases the compute burden over standard WRF by a factor of 2). They are also the most technically demanding due to the need for much more complex input and validation data streams and the additional workflow steps required for the chemical input data preparation. Detailed visualizations will be generated following, but significantly advanced from those currently available [9].